While reading Bizer, Heath, and Berners-Lee’s article, I decided to try out some of the linked data resources they mention.  I found links to some browsing and searching tools on LinkedData.org and tried out LOD Cloud Cache search engine (since it allows traditional searches with words instead of URIs).  I did a search for my favorite Pokemon, Drifblim. 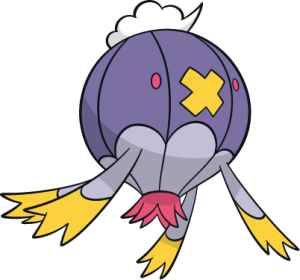 To be honest, I didn’t really understand the results.  The first result was Drifblim’s entry in “dbpedia.”  Dbpedia’s entry listed some subject/predicate/object triples about Drifblim, where Drifblim is the subject.  For instance, Drifblim (subject) is the the primary topic of (predicate) http://en.wikipedia.org/wiki/Drifblim (object – Wikipedia’s entry on Drifblim).  I also got to see the “sameAs” predicate in use, where Dbpedia noted that Drifblim “is sameAs of” Grodrive (Drifblim’s French name).  Clicking on each type of predicate in Dbpedia gave me more information on it, although again I had a hard time understanding what the information meant.

Another linked data search result was to a “WikiData” page about Drifblim – what I assume is a wiki-based database of linked data, an alternative to Dbpedia.  This page had some different triples, such as Drifblim (subject) has the label or name (predicate) of Drifblim, Drifzepeli, Fuwaride, etc. (object – names for Drifblim in other languages).  It also included a “description” predicate which told me that Drifblim is a species of Pokemon.

Although I didn’t really know what to do with my results, I can see how they exhibit what Bizer et al. call “a more detailed interface to the user that exploits the underlying structure of the data.”  To me, the results seem almost mathematical – instead of saying “Drifblim is also called Grodrive,” it’s like a formula that reads DRIFBLIM = GRODRIVE.  This tells me the structure of the data, that the two pieces of data are equivalent, and it would definitely be more machine-readable than an English phrase.  I can see linked data being more useful for programmers and developers (and programs and applications) than for normal users like me.  The article’s section on “domain-specific applications” gives some good examples, such as Revyu which provides richer data to end users by querying for linked data behind the scenes.  (I searched for Drifblim on Revyu, but sadly found nothing.  Maybe it’s time to write a review…)  I think other applications which draw upon scholarly data, like Talis Aspire, would be great for DH projects.  I’m left wondering how much linked data has developed since this article’s publication (in 2009?).  From what I saw online, not much has changed, and I’m wondering how far along developers are getting toward making linked data useful for the average user, or toward “the ultimate goal of being able to use the Web like a single global database.”

“a web of things in the world, described by data on the Web”