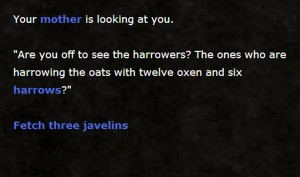 I’ll start by reflecting on whether or not our project has moved towards some of the tentative goals I set earlier. At first, I conceived of the project as a text game/work of interactive fiction that traces archetypes through the chivalric romance tradition. The game would move through a number of different literary modes, draw from a bunch of specific texts, and characterize its protagonist as an abstract “knight” or “wizard.”

Once we started working, I quickly realized that the project needed to be more focused–not necessarily with respect to its goals (though perhaps that is true is well) but definitely with respect to the amount of ground the project should cover. I decided to focus the narrative on two specific characters, Perceval from Chrétien’s Arthurian Romances and Bradamant from Ariosto’s Orlando Furioso. This felt more achievable than trying to figure out and then explain what such loaded archetypes as “knight” and “wizard” mean throughout literary history. My hope is that focusing on specific characters will make the game more engaging, while still managing to encourage players to think about the ways in which literary archetypes are preserved and upended. By following parallel stories from two different traditions (twelfth century French Romance and sixteenth century Italian epic), the player should be encouraged to compare and contrast different literary modes.

So far, I’ve been using hyperlinked footnotes to explain where things come from. This is the least obtrusive way I’ve been able to think of that offers the player a sense of literary and historical context. I still think this is a pretty clumsy, not to mention boring, way to convey information to the player. Though Joe and I have come up with a lot of ideas to make footnotes more interesting, I’m still trying to think of more interactive, organic alternatives to that system. Since the didactic nature of this project is sort of inevitable, I feel obligated to clarify, to tell the player things that I might not in other circumstances: references, period artwork, moments in which I’ve taken liberties with the narrative of source texts, etc.

Writing for the project has been a strange experience, and I still haven’t completely figured out what to call it. It is a kind of quotation and summary and a kind of creative writing (probably more the former than the latter). It’s a kind of summary that operates in a specific mode; it takes its stylistic cues from medieval and renaissance texts in translation, which is weird to think about. The hypertext form, in itself, de 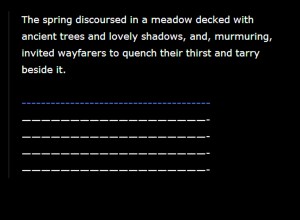 mands a lot of changes. In writing in the second person present and thinking in terms of frame-to-frame narrative, I’ve tried to consider pacing, accessibility, subtlety, and mystery. Sometimes, I feel inclined to quote the text directly, when a particularly beautiful or moving passage comes up (I still haven’t worked out the best, most unobtrusive way to cite my sources). I tried to compliment this short, eloquent excerpt from Orlando Furioso with a simple visual abstraction of a stream. Clicking on the blue link is meant to simulate drinking from the top of the stream. It’s kind of clumsy, I know, but I think this sort of clumsy trick can be endearing if used sparingly, and it’s fun to think about how such a mechanical action as clicking a mouse can be abstracted to imitate tender and tactile interactions.

As you’ve probably already gathered, the project isn’t anywhere close to finished. That’s one drawback, but the project has been the most rewarding kind of challenge. That this game wants to be didactic threatens to blunt what could make it interesting. But it’s also true that ignoring its didactic element would probably undermine its potential value. I’ve been trying to navigate those two ends of the spectrum.

The collaborative aspect of this experience has been really valuable to me. I’ve had the luxury to focus on text and abstract ideas largely because of Joe, who jumped on board as soon as I mentioned the project too him. I could not have predicted how quickly and skillfully Joe would take to experimenting with Twine macros and HTML code. His involvement in the project has been invaluable. In addition, Rebecca has helped us by taking meticulous, thoughtful notes on both original texts and modern adaptations of the stories that are relevant to the project. These contributions will also be invaluable in moving forward. I plan to finish the game this summer, hopefully with Joe’s continued technical and creative assistance.

Some ideas we eventually want to implement: a courtly love dating sim, original artwork for footnotes, and music/sound effects. Joe and I were talking the other day about how it’s likely possible to embed a simple flash game into one of the frames. We’ll see what we can get done in the next couple of months, and we’re still taking suggestions!